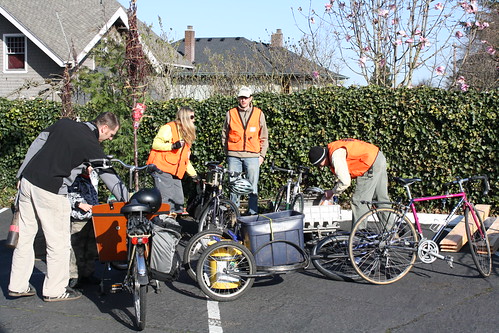 We don’t have to tell you Portland is known for it’s ecologically friendly practices. We were the first to adopt a Global Warming Action Plan. By paying a slight premium, we can choose to use renewable energy sources, like wind or solar. Shoot, we were recycling back in 1987 before it was cool.

And of course, if you’re following Portland Pedal Power, then you’re likely familiar with the fact that Portland is a bicycle friendly city, what with our 180 miles worth of bike lanes and our infamous green bike boxes.

Considering all of this, it’s no wonder we’re lucky enough to have organizations like Friends of Trees, who decided to combine the love of bikes with a love trees and start Plant by Bike in 2010. By combining the two, volunteers can now help create a negative carbon footprint. In 2010, Friends of Trees was able to plant over 54,000 trees during the 2010 planting season. Impressive, to say the least.

In total, Friends of Trees has planted over a half-million trees and shrubs in the Portland area since its inauguration, which will soon be marked by its 25th anniversary. This past Saturday, 25 tree-carrying bikes hit the streets, delivering to homeowners who purchased trees through the Friends of Trees website. Check out this video or this recent KGW news story to see them in action.

Want to join in on the fun? You can sign up to deliver trees whether you have a cargo bike, a trailer, or just a set of handlebars. Friends of Trees is also looking for volunteers with trucks as well, so don’t be afraid to sign up four wheels instead of two. The next day on the schedule is the first of February, planting in the Piedmont and Woodlawn neighborhoods.

Of course, if you’re short on time or a set of wheels, you can always donate by becoming a member of Friends of Trees. You can also donate by dedicating a Gift Tree or Grove in the honor of a friend or family member. These trees are all planted at the Collins Sanctuary near Forest Park.

Have you helped out with Plant by Bike in the past? Do you do your own part to clean up your carbon footprint? Let us know on Facebook and Twitter how you do your part to help keep Portland green!